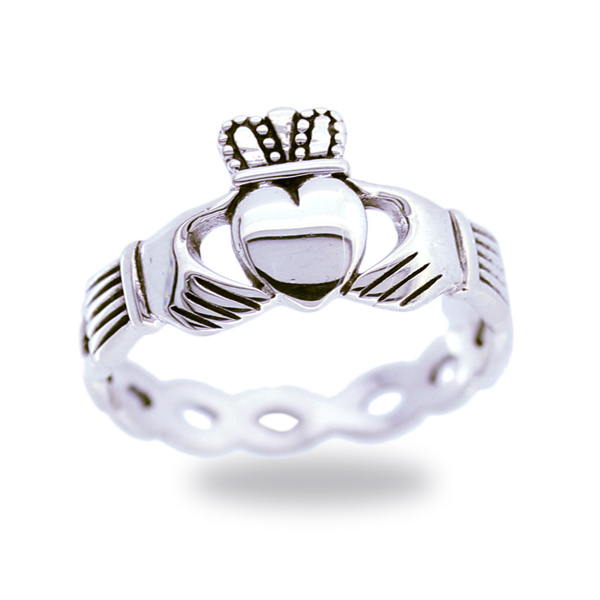 The Claddagh ring, pronounced (Klah –  Duh) – (Irish: fáinne Chladaigh) is the traditional token of loyalty and friendship as well as romantic love. The Hands represent friendship, the Heart, love and the Crown, signifies loyalty.

The Wearing of the Claddagh:

According to Irish legend, a Claddagh ring was worn with the intention of conveying the wearer’s relationship status:

The
Legend of the Claddagh Ring is the story of the mystical and beautiful
Claddagh Ring, first told over 300 years ago in the ancient fishing
village of the Claddagh, outside the walls of the City of Galway on the
west coast of Ireland.

Passed down through the generations, this romantic story centers on a man named Richard Joyce and the ring he created. Legend has it that shortly before he was due to be married, a fisherman  Richard Joyce was captured at sea by pirates and sold into slavery in Algeria. He became the property of a rich Moorish goldsmith, who sensing his potential , began to train him in his craft. In time, Richard Joyce became a fully proficient master craftsman and with thoughts of the girl he  had left behind close to his heart, he fashioned the first Claddagh Ring. The heart symbolizing love, the pair of hands representing friendship and the crown for loyalty and fidelity.

In 1689 after an agreement with King William III to release all his subjects held in slavery, Richard Joyce found himself once more a free man. His master, who had by now grown very fond of him, offered his only daughter in marriage and half his wealth, if he would remain in Algiers, but Joyce declined. After fourteen years, returned home to Galway, and brought with him the ring he had fashioned while in captivity. On his return he found that his sweetheart  had waited for his him,  and presenting her with the Claddagh ring, they were married.  His initials are in one of the earlies surviving Claddagh rings.